One of the largest privately-owned sawmills in the UK belongs to Pontrilas Timber. Headquartered on the outskirts of Hereford, the company constantly holds a stock of over 20,000 tonnes of timber on their vast yard, processing between 8 and 9 thousand tonnes on an average week.

To maintain a constant supply of timber into the mill the company relies on the services of a number of large pick and carry material handlers which travel around the yard undertaking both loading of the infeed conveyor to the mill and unloading of the large number of trucks entering the yard on a daily basis.

Over the past few years the yard has relied on a fleet dominated by Liebherr machinery. This has changed recently with the introduction of a new Sennebogen 730E purchased specifically for a slightly larger carrying capacity. Brian Pugh is the man in charge of the facility and is the man with the ultimate decision as to what machines come into the fleet. “We take the views of our operators into consideration when it comes to running our machines.” Brian comments “They are the ones that have to spend a whole shift in them and are the ones at the front end of our operations. We need the operators to be able to get the best out of our investments at all times. It’s no good having an unreliable, uncomfortable machine as our whole operation depends on their productivity, availability and operator acceptance.”

Purchased from Molson Green, Sennebogen’s main dealer for the UK the new arrival has been put straight to work in the busy yard assisting with the 65-70 loads of timber coming in on a daily basis. Fitted with a 2m2 timber grab, the 730E boasts almost a 10% increase in grab size over the equivalent Liebherr machines resulting in a slight decrease in unloading times for each truck.

The increase in grab size whilst still keeping a base machine size similar to the ones already in use means the layout of the yard doesn’t have to be altered. Whilst the base of the machine mirrors the size of the Liebherr’s, the main benefit can be seen in the radical design of the Sennebogen’s upper structure. The 34 tonne plus machine is built around a compact tail swing upper structure, something very rare on this size and style of machine. Usually machines of this size require a standard counterweight to balance the machine and load out but because of the design of the machine, this has been reduced to give just a 620mm rear overhang. This short rear end has been achieved by the designers moving the engine and other vital components to a large compartment on the offside of the upper structure. Mounting the 228hp, 6.7 litre Cummins longitudinally meant better weight distribution and also allows the boom foot to be moved further back in the structure resulting in a very stable machine.

The heavy-duty chassis comprises a significant amount to the machine’s total weight of almost 34 tonnes. Constructed around a pair of extremely heavy-duty steering axles to both the front and rear, the Sennebogen boasts a tight turning circle of just 5.8m. A full set of galvanised steel mud guards adorn the chassis both protecting the wheels and tyres from any potentially damaging falling timber and keeping the upper body free from mud thrown from the 12.00 x 20 tyres. The final addition to the chassis is a full width and heavily constructed blade. Designed both as an aid to the machine’s stability and as a tool to straighten out stray logs, the blade adds boasts reinforced corners to allow it to stand up to the heavy nature of the job.

The large, centrally mounted slew-ring mates the two parts of the machine together with the boom foot falling almost centrally through the slew ring and transferring weight directly through the structure.

As we have mentioned, the engine compartment is now situated on the offside of the machine. Forward of the engine lies the large cooling pack with the whole bay protected to the front by a very substantial tubular guard. Access is great thanks to the large gull-wing canopies covering both the engine and cooling pack compartments. Behind the cab is a sturdy ladder giving access to the top of the body and to the rear of the boom. As with the offside of the machine, the gull-wing canopy opens up to provide good access to the hydraulic system, screen washer bottle and the large IP rated fuse board. The whole of the upper structure has been surrounded in a sturdy galvanised boxing ring which like the rest of the machine, has been adorned with an array of LED lights to allow the operator to see his surroundings even on the darkest of days.

The large Sennebogen MaXcab is accessed via a large integrated ladder mounted to the 1.5m fixed riser and incorporates a large sliding door to make getting inside slightly easier. Driver acceptance of the new machine has been good with most reports coming back being favourable for the well laid out and appointed cab. External protection for the cab comes in the form of a typically over engineered tubular cab guard to both the top and front of the structure. In standard specification the 730E comes with joystick steering although the traditional steering wheel is available as an option, something Pontrilas have taken. For those unfamiliar with the Sennebogen cab layout, it is typically Germanic. It is very well constructed and laid out, with a large colour screen displaying the machine’s operational functions. The full suspension seat offers a wide range of movement in all directions as do the independently movable joysticks. Despite the addition of the heavy FOPS guarding, the view from the seat s very good. As an additional aid to safely cleaning the windows and the mirrors on the machine, a fall arrest system has ben installed.

As we have mentioned, the positioning of the machine’s vital components to both sides of the machine allows the boom foot to be mounted further to the rear of the machine compared to many competitor’s products. The 730 is fitted with an 8m straight boom and 4.5m angled dipper which allows a potential maximum pin height of almost 13m and a potential reach of a shade under 11m. The rearward mounting of the boom allows for a smaller rear overhang on the upper structure which on this machine measures just under 1m, something many machines of this size cannot boast of and something the management team like immensely at Pontrilas. “The smaller overhang allows us to put this machine in between some of the stacks of timber and still work it effectively.” Brian comments.

The huge Sennebogen grab stands at over 3.5m in height when closed and offers a huge opening width of over 3m allowing it to effectively grab logs over the full width of a trailer bed. Fitted with quick-release couplings, the grab can be exchanged quickly when in for maintenance ensuring the machine is kept running at all times.

At the time of our visit the Sennebogen was being used to undertake a variety of duties around the very busy plant. In between unloading the artics bringing logs in from around the country, the handler was kept busy loading the deck which fed the raw material into the de-barking and saw plant. Depending on the diameter of the material, the 730E was clearing each bay on a trailer in just three passes transferring the timber to the stockpiles and eventually unloading a truck in approximately 4 minutes. When tasked with running timber from point to point, the Sennebogen is no slouch. Combining all-wheel drive and a top speed of 20kph the machine is capable of handling anything the team ask it to do. In some operations the pick and carry machines are asked to travel considerable distances between stockpiles and processing plant but at Pontrilas the fleet of wheeled loaders with log grabs undertake the bulk of the running around.

It is still early days for the big green log handling machine, but Brian and his team seem very upbeat about the prospects for the Sennebogen brand within the operation. 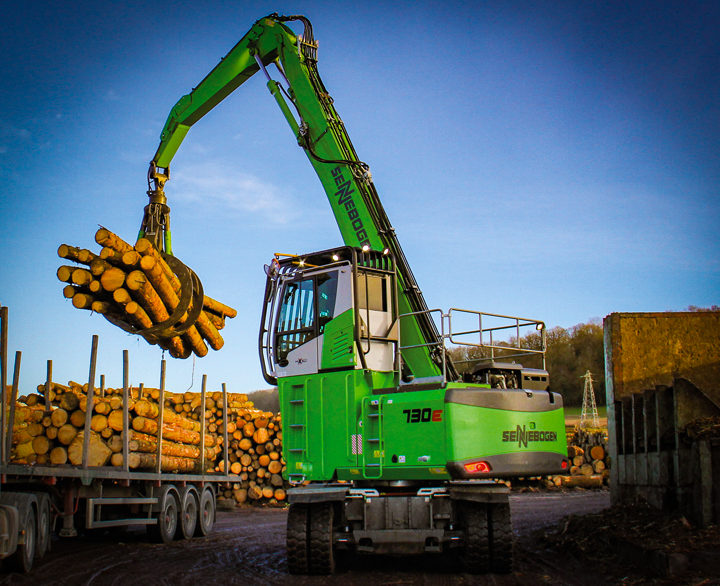 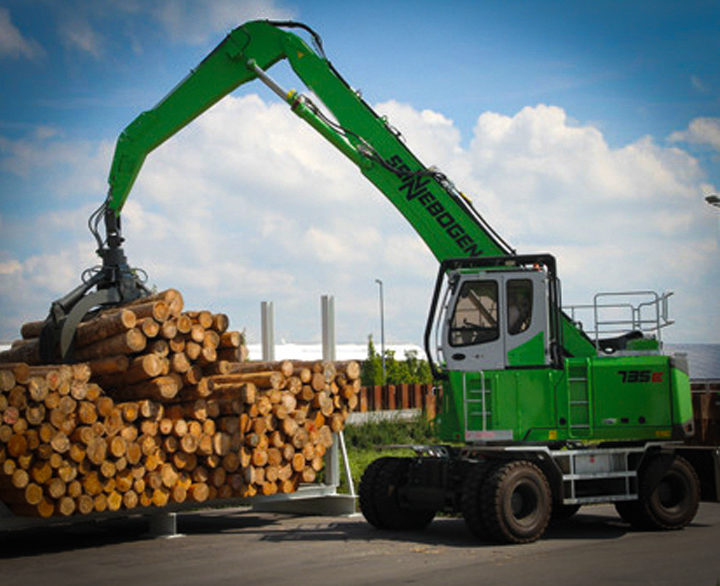 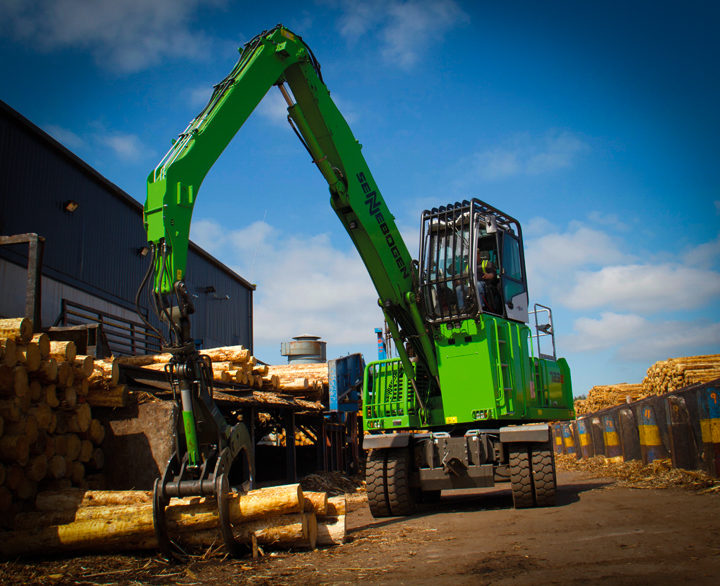 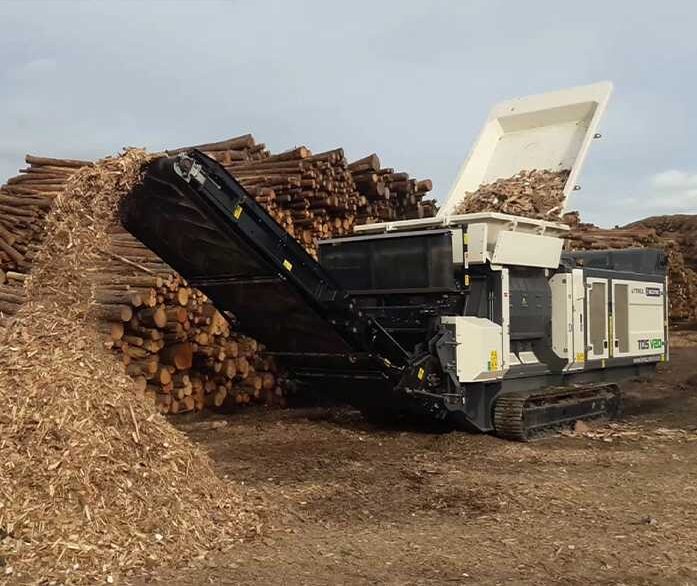 ‘V20 is for versatile’ for A.W. Jenkinson 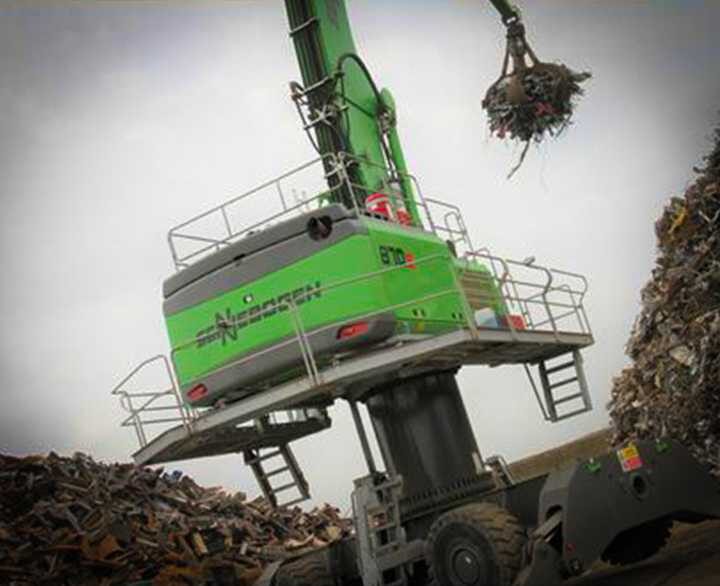