Gone are the days when developers rock up to a new site, rip any trees and bushes out and burn them in a large ceremonial bonfire.

Modern developers will follow the advice from a team of ecologists and will go on to employ a dedicated company to de-vegetate the site according to the ecologist’s reports. This work is usually done far in advance of any construction works commencing. This is true of the huge 100-acre former British Sugar site on the outskirts of York.

The former refinery was demolished over a decade ago and the site mothballed. The intervening years has seen the vegetation on site literally bloom and the owners have recently engaged the services of Chester based specialists Treefellers to undertake a comprehensive program of tree felling, chipping and clearance.

We first caught up with Treefellers and its Operations Manager Nick Brown in 2018 at their project in Warrington where they were using their then new Hyundai HX145 and WestTech tree shear. Two years have almost passed since this visit and the mechanisation of the company’s operations has increased to meet the massive demands placed before them to complete projects quickly and profitably but more importantly, in safety.

Following the arrival of the Hyundai, the company has returned to supplying dealers Molson for their latest purchases, a new SK85MSR and a former SK210LC demonstrator. “We went back to Molson as we have nothing but praise for their service they have given us.” Nick comments “We decided to go for the Kobelco this time because of their impressive flow rates and low fuel consumption figures.” The Hyundai is still as fresh as it was when new and Nick explains that the company doesn’t work the machines all year round as they are limited with nesting seasons on most projects. “We may only use the excavators for six months of the year, but we need them to be in perfect order and totally reliable for these times.”

The full complement of the Treefellers fleet was out at York where they were commencing the clearance of a small stand of conifers and larch trees alongside an area covered with a variety of unkempt trees and bushes of various types. “We have to be extremely careful on sites like this.” Nick explains “The demolition of the buildings across the site has left the area strewn with off-cuts of rebar and other items which could cause our lads on the ground to fall and hurt themselves along with getting caught in the shear or the tracks and cause mechanical damage. We do a walk through of an area we are going to cut to just have a check to make sure there is nothing obvious lying around. It’s not just material that can be hiding in the undergrowth, we have had incidences of rough sleepers being holed up inside a wooded area we have been asked to clear.”

With the work area checked for debris, the Hyundai is set to work clearing an area of small, mixed species bushes and trees. The 1.6 tonne WestTech C350 is handled impeccably by the 15-tonne excavator. Even some of the larger examples of tree grabbed securely in the attachment prove no issues for the machine although its stability can be slightly compromised working cross carriage in this situation. “The operator needs to be careful at all times.” Nick comments “It’s a finely balanced machine and a slightly denser tree than expected combined with a sudden movement on the levers can cause a little bit on instability.” Working alongside the Hyundai is the Kobelco SK85MSR. The 9t compact tail swing machine has been fitted with an additional counterweight to increase the machine’s stability and increase the productive working envelope of the excavator. The addition of the counterweight offsets the fitting of an Engcon EC209 tilt rotator on the end of the dipper. Complete with EC-Oil coupling system, the little Kobelco can be used with a variety of attachments making it a very versatile and competent performer in the fleet. Working alongside the Hyundai and carrying an Intermercarto five-finger grab, the Kobelco is seen as an ideal accompaniment to the Bandit tracked shredder used by the team to reduce almost everything they cut down into a usable biomass product which is usually shipped to a plant in Widnes. The addition of the tilt rotator to the Kobelco has made the job of feeding material into the mouth of the Bandit far easier. On the levers of the Kobelco is freelance operator Dave Broster “Having a tilty makes the job so much easier. You can stand in one position and select the material you need to put in next.” While the addition of the tilty puts some finesse into the job, the Bandit is all about power! Manufactured in Michigan USA, the Bandit 20XP chipper is capable of handling timber up to 600mm in diameter and as long as can be fed into the 622mm x 667mm feeder opening. Powered by a Tier4, 315hp Volvo engine, the Bandit weighs just 9.5 tonne and measures in at just 2.8m x 5m. The heavy-duty undercarriage rides on triple grouser steel pads with the option of a set of bolt-on rubber blocks for when it is required to operate on delicate surfaces. With full remote-control operation, the Bandit is controlled from the comfort of the SK85’s cab by Dave.

For larger chipping operations the company use a combination of vehicles to remove the chipped material from the work area but for this smaller section, the task was handed out to (in my opinion) one of the most impressive vehicles on the fleet, the company’s Unimog U1650. The Unimog made the task of reversing across the uneven ground to the discharge spout on the Bandit look easy and whilst it is a climb and a half to the cab, the view from the seat is impressive. “We usually use the ‘Mog to tow our kit around from site to site.” Nick comments “As we have travelled over two hours to the York job it has had an easy time on the back of low loader for this job!”

The largest machine on the fleet and one which has been taken on instead of hiring in as and when required is another Kobelco, this time a low hour SK210LC purchased from Molson who had it as a demonstrator. “We seemed to be using larger machines more and more.” Nick commented “The cost of hiring wasn’t that bad as rates in the UK are unreasonably low compared to the cost of purchasing an excavator. But we needed a good, reliable base machine that we knew we could stick on a job and it would be reliable for the duration of that project. We have to work in a small window before nesting season starts and reliability is the key to us being able to complete contracts on time.” The choice of Kobelco wasn’t as painted on as you would expect though as Nick says the company looked at the whole market before Andy Wilkinson tempted them with a very good deal for the nearly new 21.8t machine. “We couldn’t fault the deal put together again by the Molson team and with the very good reliability from the two other machines from them, we knew we couldn’t go wrong.”

With the two smaller machines looking after the small crop of bushes and trees, the large Kobelco was tasked with commencing work on removing some large conifers and larch trees in a small copse next to the access road to the site. With an access fence removed and the same thorough walk through of the site to look for potential damage causing material completed, the SK210LC was set to work.

While the Hyundai is fitted with the WestTech tree shear, the Kobelco has been equipped with a Dymax HPX18 shear capable of taking down an 18-inch diameter tree in one cut. The 4.5 tonne shear is a compact design and includes a built-in rotator allowing Nick to grab a tree and cut without a massive amount of moving about to get into the correct position. “The trees here are on the limit for this attachment and with the height of them, I’m taking them down in two pieces.” He comments. The Kobelco has a full range of auxiliary pipework to the boom and dipper supplying the required 300psi pressure for the shear and has been retro fitted with a sturdy Rock Guard ROPS and FOPS cage to protect from any errant branches falling from above. Powered by a 4-cylinder Hino engine delivering 160hp, the Kobelco is more than capable of meeting the demands placed on it by Nick and his team. “We are very happy with this and the other machines from Molson. They have supplied us what we wanted and when we needed it. The machines have lived up to our expectations and have been very reliable and fuel efficient. In short, we can’t fault the product, the dealer or the aftersales from Molson.” 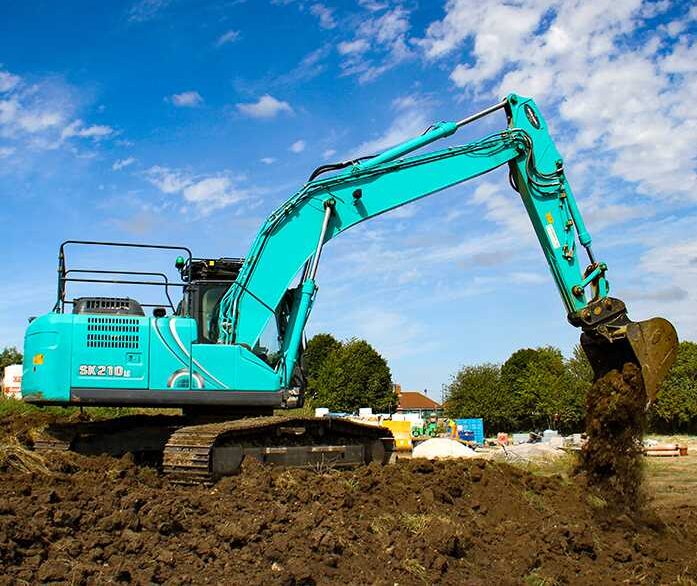 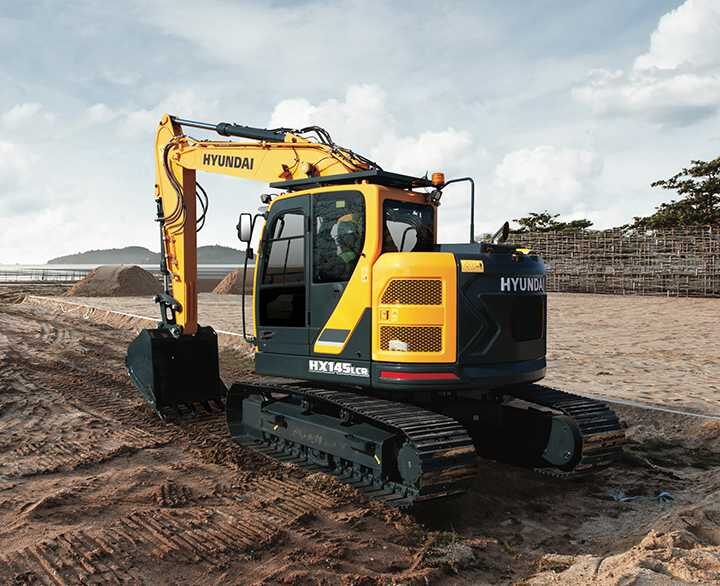 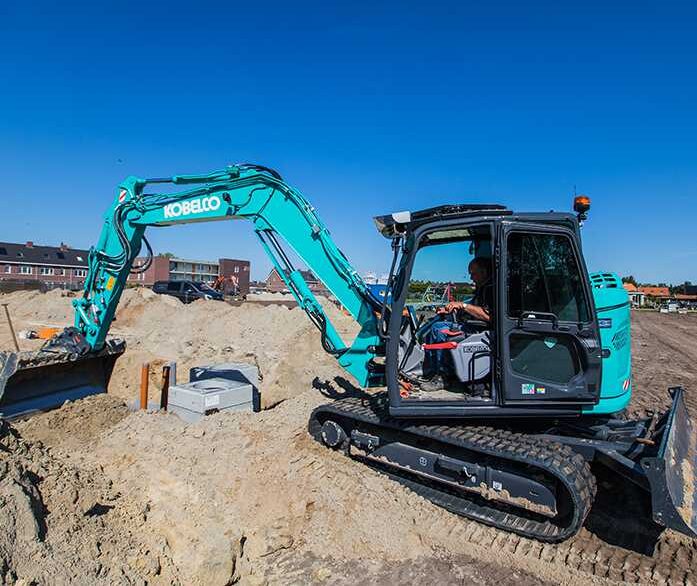