I have often opened a bag of compost and spread its contents over a newly laid flower bed. I have never actually once thought how it was made. We take many things for granted and don’t really put much thought into how it got there. When I was asked to look at a new Molson Finlay 883+ screener I assumed wrongly that it would be in a quarry. In fact, it was working in a recycling facility where they made compost. It would bring a whole new meaning to the phrase ‘a growing business’. Based beside Bournemouth airport is Eco Sustainable Solutions. This company was formed in 1993 by Trelawny Dampney.  Trelawney had the vision to start the company after a friend came back from a visit to Germany reporting the story of how he saw them collect garden waste and turn it into compost.  Over the course of the next twenty years, Eco evolved into a successful, trusted and respected business. Its commitment to innovation distinguishes it from all competition. Taking climate changes into account, Eco strongly believes that renewable energy represents the future. Their evolving techniques have saved councils and taxpayers thousands of pounds and the company has been recognised both locally and nationwide. Eco currently process upwards of 250,000 tons of organic material over four separate facilities, an output cementing their position at the forefront of this burgeoning industry.

Supplying them their screeners and trommels is Molson Finlay and they have had a successful relationship with Eco for the last fifteen years. I asked Molson sales representative, Gareth Johnson, to expand on that relationship. “We listen to the customer. We don’t go in there and try to sell a machine, we listen to what they need and then give them the best application for their needs. We always listen to their feedback and work with Trelawney and Justin Dampney to ensure that their needs are satisfied. We have always worked with the philosophy that getting the order is only the start of the relationship. Our equipment is widely known as the most available to work and we adhere to an efficient and compatible back up system to ensure the equipment is always available to work. I believe that this is Eco’s third 883 screen” said Gareth.  As many of you know, the Finlay organisation was purchased by the Molson Group last March from Terex. Molson Finlay now have the distribution rights for Finlay mobile crushing, screening and conveying equipment across the UK. I ask Gareth how is business currently?  “The summer is upon on us and momentum is rapidly building with orders and enquiries from existing customers and working with new customers meaning exciting times are ahead. The seamless transition from Finlay Group to Molson Finlay has been exciting and very much welcomed. The professionalism and efficiency of the Molson Group is inspiring and it is a real pleasure to be part of such a vibrant and special team. The future is looking great with Molson’s being able to supply from the front to the end of the industry and in a way which others can only aspire to” he said.

When I arrive on the job it is a hive of activity. Trucks are depositing their cargo of waste material and loading shovels and excavators are hard at work. After the safety induction it is time to go and see their new screener in action. First, I really like the black paint job. It makes the machine look very stealthy and hungry for action. As the excavator feeds in the material the screener gets to work. Its job is to separate the material and it does this efficiently into several neat stockpiles. This machine has been designed to operate as a primary scalper in the following applications: quarrying, demolition, recycling of construction and demolition materials, landfill materials, topsoil, sand, gravel, coal, ore processing iron and aggregates. The 883+ can also be used as a secondary screen powered by a crusher. Its robust construction, compact design and features make it the most flexible scalping machine in their range. Having a closer technical look, the screen box can be equipped with bofor bars, piano strings, grids, perforated sheets, spurs and cascading fingers. The angle of the screen box can be adjusted hydraulically between 13 and 19 degrees. Hydraulic lifting of the screen box of 500 mm facilitates access for changing the grids. All storage conveyors have a hydraulically adjustable throw angle. The engine now runs efficiently at a lower 1800 rpm saving on running costs. The hydraulics have been upgraded. The hydraulic supply to the fine’s conveyor has been increased by 50%. The fines conveyor width has been improved from 32″ to 36″ allowing more capacity. The fines conveyor and mid-grade conveyor can be specified on order as to which side the customer would like these to discharge. The oversize conveyor can be positioned to allow the 883+ to become a two-way split as opposed to the generic three-way screen. There is a lot going on with a screener. It does a huge amount of work and on this job, it is even helping to grow the flowers and help save the planet. 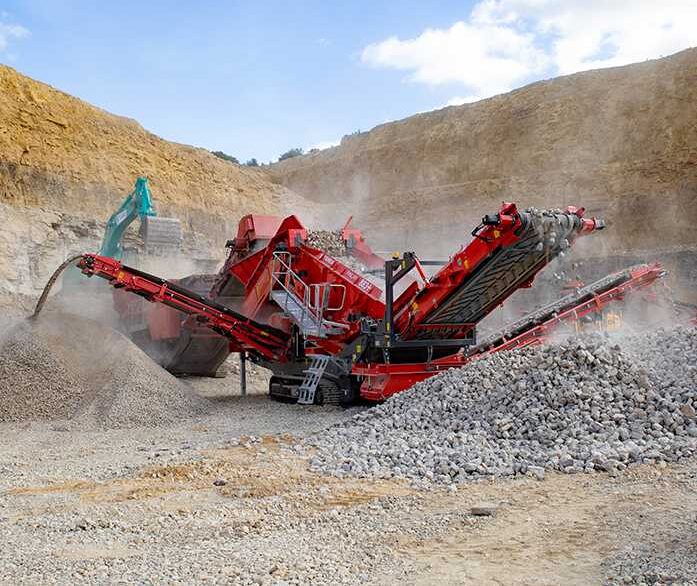 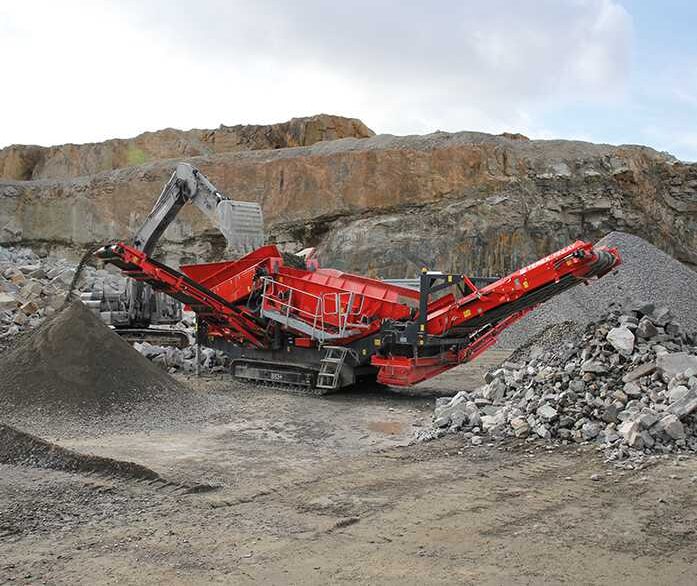 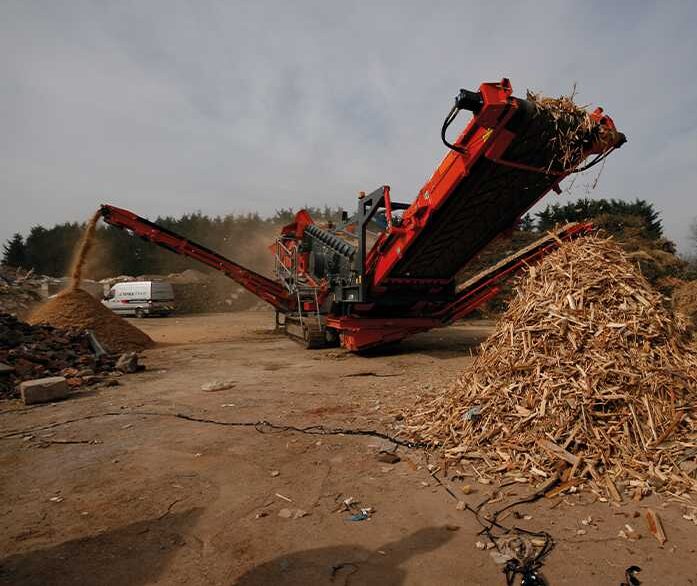