Midlands and Welsh Members City Demolition have recently been called upon to breathe life back into a tract of derelict industrial land in Nuneaton.

The prominent site situated next to the A444 and only a stone’s throw away from the M6 has been abandoned for over a decade since its former occupiers moved out and demolished the large warehouse which stood in the centre of the plot.

Late 2018 saw Birmingham based City land on site to remove the large areas of tarmac hard standing, concrete slabs and footings in readiness for potential development to commence early in 2019. Already operating a large fleet of demolition kit capable of undertaking this project, the chance was taken to further enhance their fleet’s capabilities with the purchase of a large jaw crusher capable of processing the huge amounts of material to be removed from the ground.

Mark Doyle, City Demolition’s MD commented “We already run a number of smaller crushers which would have been capable of processing this material but these machines were tied up on other projects which meant we would have been forced to hire a suitable crusher in for a period of time. With larger crushing projects on the horizon for us, we saw it as an ideal time to increase the capabilities of our crushing service and opt for a larger, higher capacity machine.”

The majority of the plant and equipment in the City fleet has been sourced from Bristol based ISP Member, Molson Group including a range of the latest Hyundai excavators and Keestrack crushers. With Molson dropping the Keestrack range in 2018 to sign an agreement with Terex Finlay throughout England and Wales, the City team decided to take a look at the Irish manufactured crushing system.

There are members of the demolition community who swear by impact crushers for the processing of demolition material but the tried and tested set up of the more common jaw crusher design is seen as one of the simpler and more cost effective crushing solutions available.

Supplied through the Molson Green side of the business, the Terex Finlay range comprises of over 20 models of cone, impact and jaw crushers with operating weights in excess of 72 tonnes. “We wanted a crusher which could offer us the extra capacity we needed but was also relatively easy to transport and set up.” Mark explains “We looked at the range of jaw crushers available from Molson and were keen to try one out.”

With an eye on offering a versatile crusher as a demonstration machine across the country, Molson had ordered a 49 tonne J-1170 model to be shipped across from Ireland. The first stop for the machine was at City’s project in Nuneaton, where it remained! “We were immediately impressed by the specification and the build quality.” Mark explains “We decided that if the deal was right, the machine would stay.”  With the deal struck, the crusher was quickly stickered up with the City Demolition logos and put straight into crushing the large amounts of slab and footings being pulled from the site.

With a jaw opening of 1.1m x 700mm, the hydrostatically driven jaw is adjustable using a set of shims to alter the chamber configuration allowing a wide variety of single-sized material to be produced. Crusher operator, Macauley Thomas said that the new arrival was a lot less complicated than the Keestrack machine it has replaced and that the build quality is far more robust. “We’ve only had the crusher for a few weeks and it has already impressed with the speed it crushes this concrete. Once I had it set up, it produces a very good and consistent material.” The concrete is being loaded by another Molson supplied machine in the shape of a Hyundai HX300 excavator. Fitted, like all of City’s large excavators are, with ECY’s OilQuick coupler, any large pieces of concrete making their way onto the stockpile can be reduced in size within seconds thanks to the ability of the operator to quickly change from a bucket to breaker in under 30 seconds without leaving the cab.

Powered by a 365hp Scania engine which meets Tier4 emissions regulations, the crusher has surprised Macauley with its low fuel use. “It’s very good on the fuel for such a big machine and the amount of work we’re expecting it to get through!” With its standard fines conveyor removing smaller, undersized material to one side of the crusher and the over-band magnet working hard to remove the thin rebar from the crushed material, the Terex Finlay was coping very well with the material being loaded steadily by the Hyundai. The performance of the Hyundai/Terex Finaly team kept the small Hyundai HL760-9 wheeled loader fully occupied in stockpiling the material.

Both Mark and his site team are extremely pleased with the purchase of the new crusher. Having the back-up and support from the Molson team has reassured the Mark as the Hyundai excavators on the fleet have been a reliable and productive product. “We are only as good as the equipment we run.” 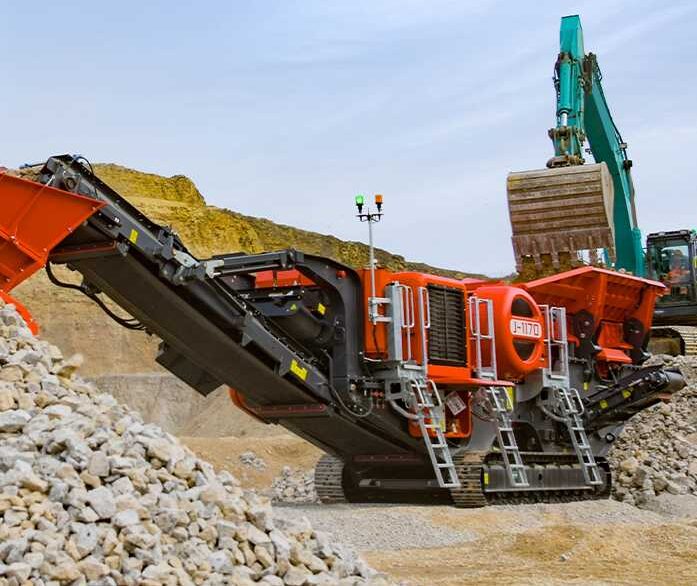